If the Judge In My Disability Case Works For Social Security, How Can I Be Sure He Will Be Fair To Me?

“I’m an administrative law judge with the Social Security Administration. I’m going to make a new and independent decision. I’m not bound by any prior decisions made in your claim”

This is the third post in this series about the independence of administrative law judge who will preside over your Social Security disability appeal.

The recent efforts by Representative Darrell Issa (R. California) and departing Senator Tom Coburn (R. Oklahoma) to deprive your judge of his independence are nothing new. A certain number of politicians can always be counted on to demonize the disabled and otherwise disadvantaged persons when economic times get tough.

For example, in 1980, at the end of President Jimmy Carter’s term of office, Congress passed the Social Security Disability Amendments of 1980, which included a provision to be known as the Bellmon Amendment. It was a time of economic malaise, in the early stages of a severe recession with a sharp rise in unemployment. The following table shows the recessions that have come and gone since 1970 with their impact on unemployment and disability claims. 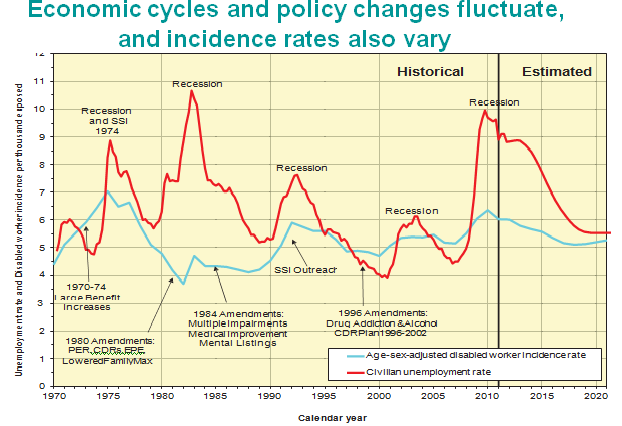 One sees in this table that the incidence of disability claims is really only mildly correlated to unemployment rate spikes during economic recessions. But politics runs on emotions, not facts, and too many people get easily spooked in an adverse economy. In 1980 the American people were in the midst of such a crisis in confidence.

It was a perfect time for politicians to divide the citizenry against itself. The legislators who supported the amendment proposed by Senator Henry Bellmon (R. Oklahoma)expressed the general opinion that too many disability claims were being awarded, and that the American people could not afford to be so generous to the disadvantaged in hard times.

The Bellmon amendment required that the Secretary of Health and Human Services initiate a program of “reviewing” favorable decisions rendered by SSA’s administrative law judges. The intent to influence judges’ decisional outcomes was overt.

After President Reagan took office, a new Associate Commissioner, Louis Hayes, undertook this mission with a vengeance. In 1983, he issued a memorandum to SSA’s administrative law judges, announcing a “Bellmon Review” of judges who had allowed more than 66 2/3 % of their cases, as it was determined that judges who allowed more that percentage were aberrational and needed to be studied to determine how to “counsel” them. Certain judges were selected and notified to appear for this Orwellian “counseling”.

To its everlasting credit, the independent Association of Administrative Law Judges sued the Social Security Administration.

How that lawsuit and the Bellmon “review” turned out will be discussed in our next post on this subject.

Do Social Security Benefits Get Taxed?